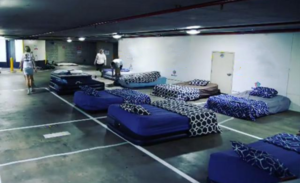 During the day, it serves as a parking lot in Brisbane, Australia, but at night, it transforms into a clean, cozy, and warm home for the homeless.

Homeless people attempting to make a living on the streets are a major issue in every country. Illness, unemployment, and other factors all play a role. People lose their homes for a variety of causes and end up living on the streets. These people are unable to function because they have been abused and are ill, and they cannot afford to see a doctor; in other words, they are attempting to survive in a vicious circle.

These people, who have nowhere else to go, make beds out of cardboard boxes and newspapers and sleep in nooks and crannies. They yearn for a bite of hot food and a change of clothing. A charitable organization in another part of the world has agreed to help these people.

The Australian Beddown charity wanted to support homeless people after seeing their dreadful living conditions. As a result, they considered converting unused, safe spaces like parking lots into shelters for these people. After meeting with the authorities of Brisbane’s largest parking lot, the organization’s volunteers agreed to a two-week trial period and got to work.

The organization’s volunteers have started working nonstop to build a healthy, warm, and clean shelter where homeless people can get a good night’s sleep. Norman McGillivray, the founder of the Beddown charity, had the idea first.

The organization’s main mission is to ensure that the homeless have a convenient, wet, and healthy place to sleep at night. Because of their living conditions, many homeless people suffer from insomnia. This leads to a slew of other health issues, including depression, diabetes, hypertension, obesity, and memory loss.