HomeNews Beds for the Homeless in Public Parking Lots

Beds for the Homeless in Public Parking Lots 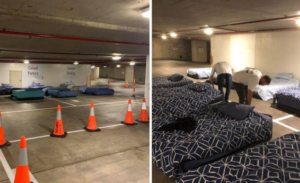 In Australia, a non-profit group committed to putting beds in abandoned parking lots so that the homeless can sleep there has arisen. Beddown is the name of the company, which is spreading into many parking lots throughout Australia.

Why hadn’t we thought of it before? Norm McGillivray, the owner, says the idea came to him when he left a parking lot late at night and found it deserted. For years, Norm had worked to improve the condition of the country’s homeless, but now he could provide them with a comfortable place to sleep.

Norm reveals the story of his life when asked about his inspiration. His father, a prominent businessman, suffered a cardiac arrest that resulted in facial paralysis. His father lost his employment, divorced his wife, and was forced to live on the streets. On the streets of London, he died absolutely alone… Standard was a young boy at the time.

Since then, Norm has devoted himself to helping the homeless through non-profit organizations. The fact that Australia is a first-world nation with over 8,000 people living on the streets seems to him to be a terrible contradiction.

Inflatable mattresses (with clean sheets) are placed in public parking lots through Beddown. It has partnered with Secure Parking, Australia’s and New Zealand’s largest public parking firm, and they are looking to participate in approximately 600 parking lots, currently only in Brisbane. As they are inflatable beds, they can be placed and removed very quickly, so they do not affect the parking business, in addition to being located in safe and clean places.

It has also partnered with other agencies to provide facilities such as showers, laundry, food and drink, medical examinations, and clothes. Hundreds of homeless people would be able to sleep in a bed as a result of his initiative.